The 23rd of March saw all 12 teams assemble for the first time this season at Warmingham Village Hall for what turned out to be an unusual, but enjoyable evening!

We almost had the first ever "quiz without questions" when Peter Watson's questions for this month were left behind in Croft. Whilst a member of the Croft team returned to get them, we had some lovely food somewhat earlier in the evening than usual, following which Warmingham played a blinder and made up the first three rounds of questions entirely on their own!

Profound thanks must go to Naomi Higson, her family and all the Warmingham team members, especially Adrian and George who asked the questions. This was an unprecedented set of circumstances but handled beautifully!

After three rounds, the real questions landed, and just three round's worth were used, namely: 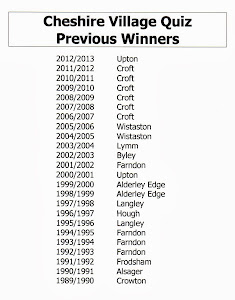